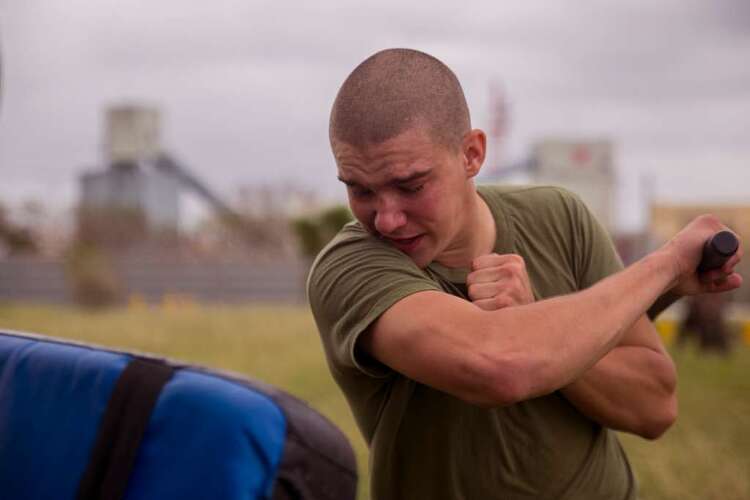 A self-defense baton is just a fancy, civilized man’s version of a prehistoric savage’s favorite weapon: a wooden club for smashing a warring tribesman’s head with. Jokes aside, it’s a very potent self-defense weapon. So much so that in some US states and countries across the world, it’s illegal to carry.

Law enforcement and security guards often carry batons because batons give them an edge in situations where using lethal weapons would be considered too excessive.

You can find batons made of various materials, including wood, plastic and steel. The strongest and most durable batons are made from hardened steel.

There are also fixed and extendable (telescopic) batons. Extendable batons are more popular for self defense purposes because they are easier to conceal and carry.

In this article, we’ll examine the advantages and disadvantages of using a baton for self-defense and provide you with tips on how to wield one properly.

1. Easy to conceal and carry

This is especially true if you carry an expandable baton. Some are so small in their shortened state that they can easily fit into a deep pocket, let alone a purse.

When you need to defend yourself, you just whip it out, and it expands to a formidable size so that you can hit the opponent to submission with it.

2. It’s simple to use (unlike other self-defense weapons)

Sure, you will be more effective if you learn some baton striking and blocking techniques. If you practice regularly, you can become really good at it and kick some buttocks.

However, even if you don’t practice, it’s really just a large, tough stick. Everyone knows how to hit with a stick, it’s the most primitive weapon of them all.

Compared with other self-defense weapons, a baton is refreshingly simple. Handling a firearm requires practice, and depending on the state you’re in, you might need a firearm license to buy one.

Knives aren’t a walk in the park either. If you don’t know how to use a knife properly for self-defense, you can easily get hurt. For example, if an opponent kicks your knife-wielding hand, the blade could slice you instead.

There is also the popular kubotan, another concealable blunt weapon. However, it’s much smaller than a baton and so it requires physical strength and fighting know-how to be of any real use.

A baton provides enhanced reach when compared to knives, brass knuckles, kubotan, and tactical flashlights (which can also be used as blunt weapons).

This means that you can deliver blows to the assailant from a safer distance. It also makes it easier to defend against multiple opponents, even while moving backwards towards an exit point.

Even if you were just defending yourself, if you shoot someone, you can easily get into trouble. It’s because it’s generally difficult to assess if the use of lethal means was justified in a given situation. Was your life at risk to a point where it was justified to shoot the other person? Or were you too quick on the trigger?

Bladed weapons pose a similar problem. A knife can easily catch the other person’s artery or a vital organ and they can bleed out before medical assistance can be given to them.

A baton is a non-lethal weapon, so you’re less likely to cause life-threatening injuries to the attacker. Breaking a bone is not as dangerous as slashing an artery, but it can stop an attacker in his tracks just the same.

5. It can be quickly unleashed

Self defense scenarios require quick thinking and acting. If you need to unsheathe a knife it requires precious moments while your attention should really be on the attacker. If it’s a foldable knife you’ll often need to secure it first so that it doesn’t accidentally chop off your fingers.

Pulling out a gun, aiming and shooting while the opponent is already very close can be difficult to pull off as well. Same is true for pepper sprays. Pulling it out, positioning it correctly and pushing that button takes at least a couple of seconds during which your opponent could grab you or punch you in the face.

With a baton, especially one that’s fixed, the story is different. As soon as you pull it out it’s ready for action, whether you need to block a strike or administer one yourself. Whether the opponent is close enough to strike or he’s at a distance, a baton will do the trick of keeping him at bay.

A baton can last a lifetime, even longer. Considering that the price is on average anywhere from $20 to $100, it’s a really good investment. There are many expandable and fixed batons on Amazon in that price range.

Of course, the fancier it is, the greater the chance that something will break. For example, if you’re buying an extendable baton, make sure it has good reviews and that it’s made of long-lasting materials. Avoid batons that rely on cheap plastic parts for the extending mechanism.

If you plan on training with the baton by hitting objects or sparring with protective gear on, consider getting one made of hardened steel because it will last much longer.

1. Illegal to carry in some states and countries

Before you buy a baton for self defense, make sure that it’s legal to own and/or carry in your state or country. This is the situation in the US:

You can check out more details about baton laws and regulations for each US state here.

Technically, a baton is treated as a non-lethal weapon. But if you hit someone with it over the head it can easily turn into a very lethal situation. Especially if you’re using a baton made from hardened steel and you use it with full force. This can lead to unwanted legal troubles, not to mention psychological trauma.

If you’re worried about getting into this type of a scenario, you should opt for a safer self defense weapon, like a pepper spray, flashlight or a keychain alarm.

Sure, a baton can help you keep an enemy at a safe distance or allow you to fight him off if he comes near you. But what if the enemy is throwing things at you or has a gun?

Throwing knives, rocks or any other heavy or sharp objects can pose significant danger in a fight. Unfortunately, a baton won’t be able to defend you against flying objects. For these situations a pepper spray or a stun gun would be a more effective choice.

4. It requires physical strength and (at least) a modicum of skill

If you’re an 80 year old granny, or your reflexes are similar to those of a proverbial granny, you should opt for a weapon that doesn’t require any fighting capabilities. You’d be safer with a pepper spray, a tactical flashlight or a stun gun. These weapons don’t require any physical prowess and strength to be used effectively.

Furthermore, although striking someone with a baton will hurt like hell even if you’re not skilled at using it, you should probably improve your skills to a decent degree.

This isn’t just so that you can hit the assailant with more force, but also in order to improve your precision and ability to administer just the amount of force that is necessary.

If you’re not skilled at wielding a baton, you will likely use too much force. This will result in slower movement that a nimble attacker can use against you. You might also hit the opponent harder than the situation warrants, and get into legal trouble if you inflict them serious injuries.

In any case, the more training you have, the more control you will have over the situation. This can be a pro or a con, depending on how you look at it.

Baton is a very effective self defense weapon. It’s also one of the most popular. If your state allows carrying it, I suggest that you do.

If you want to be even safer, also carry a ranged weapon. Whether that’s a pepper spray or a stun gun, I leave that decision to you.

A seasoned MMA practitioner and an intermediate in BJJ and Krav Maga. When I'm not knocking heads with someone in a dojo, I like chilling out with my girlfriend and our adorable pug Betsy.

link to Top 10 Martial Arts for Urban Self Defense!

Self-defense is an important skill to have in today's world. Whether you're walking alone at night or facing a potentially dangerous situation, knowing how to protect yourself can give you peace of...

Continue Reading
link to Are Nunchucks Good for Self Defense? (ANSWERED)

When it comes to self defense, many people might think of traditional weapons like nunchucks, knives, batons, sticks, swords, and guns. Each of these weapons has its own set of pros and cons, and the...

We are dedicated to answering important self-defense questions. We also test and review self-defense weapons and training gear. Our content is the result of thorough research and prior consultations with certified martial arts and self-defense instructors. Stay safe out there! - Chief Editor Peter Jerome

SelfDefenseTrainer.com is a participant in the Amazon Services LLC Associates Program, an affiliate advertising program designed to provide a means for sites to earn advertising fees by advertising and linking to Amazon.com. As an Amazon Associate we earn from qualifying purchases.